A list of seven cases involving a paper trail. Some of these cases involve missing persons who left notes behind, while others involve notes that were found during the investigation. Despite finding these clues, all seven of these cases remain unsolved today.
7. The Disappearance of Lisa Green 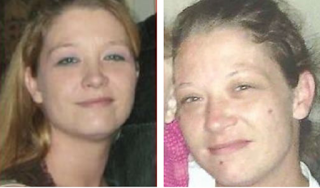 Lisa Green (31) vanished from her father's home in Louisville, Kentucky on June 25th, 2014. According to her father, Lisa stepped outside the house on the morning of June 25th and never came back inside. She has never been seen or heard from again.
Lisa left her keys, identification, and purse behind--which made it seem as if she intended to return. However, Lisa also reportedly left behind a letter, stating that a man had been stalking her and threatening to attack her. It's unclear if the message in her letter plays a role in her disappearance, but her family members do not believe she would willingly abandon her children or the rest of her family. In fact, Lisa's family members believe that Lisa was forced to leave. During a 2018 interview, Lisa's sister explained, "I think she trusted someone and they forced her to go with them, and they hurt her."This theory has not been confirmed, and it is unclear if investigators have any known persons of interest in the case. Lisa remains missing today. [read more]


6. The Disappearance of Marble Arvidson

Marble Arvidson vanished at the age of 17 on August 27th, 2011. The teen was born and raised in Vermont, and at the time of his disappearance, he was living in Brattleboro. Marble had been in the foster care system since he was a freshman in high school; he was living with a mentor in August 2011, but he still kept in touch with his first foster mother. On the day he vanished, Marble was last seen by his housemates inside his home. Around 1:15pm, once of his housemates heard Marble invite an unidentified male inside. Shortly thereafter, Marble’s housemates heard him leave the house with said male. He left a note stating he was with the “Gremlin Hoard” and would be back within the hour. Unfortunately, Marble never returned and has never been seen or heard from again.

Marble's family members believe that by writing he was with the "Gremlin Hoard" was Marble's way of saying he was partying. However, Marble left the house in the middle of the day and his note stated he would be back within the hour. His loved ones also have theorized that he went hiking, as he took his hiking boots with him when he left the house. Shortly after Marble’s disappearance, Tropical Storm Irene hit and damaged/flooded many areas along the east coast. There was speculation that Marble was swept away or drowned in the flood, but this has never been confirmed. An extensive search of the area turned up no signs of him. Marble remains missing today. [read more]

5. The Disappearance of Derek Lueking
Derek Lueking vanished after checking into a micro-hotel in Cherokee, North Carolina on March 17th, 2012. The 24 year-old traveled there from his home in Knoxville, Tennessee, after researching the Great Smoky Mountains and buying an abundance of hiking/survival gear. On the surface this does not seem too unusual; as Derek's family members describe him as an avid hiker and camper. However, Derek did not tell his roommate or his employer that he was going on this trip--in fact, they only found out about the trip after he was reported missing.

Derek's parents followed the digital trail on his computer to the micro-hotel in Cherokee where Derek had checked in. Surveillance footage captured him exiting the building around 4am. His parents subsequently drove to nearby hiking trails in the Great Smoky Mountains and found Derek's car parked at the Newfound Gap area. Inside the car, they found most of the hiking/camping items that Derek had purchased. Additionally, they found a note written by Derek that stated "Don't follow me."

Derek has never been seen or heard from again. At first, his parents thought that he wanted some time for himself. However, as time has passed without any sign of Derek, fears for his safety have increased. His case remains unsolved. [read more]

4. The Murder of Faith Hedgepeth
19 year old Faith Hedgepeth was a junior at UNC Chapel Hill when she was brutally murdered in her off-campus apartment on September 7th, 2012.  On the night prior to her murder, Faith and her roommate Karena Rosario spent the evening at the campus library to work on a project. The two returned to their apartment at around 12am and then promptly left again at 12:30am to go to Thrill nightclub—a spot that was popular amongst Chapel Hill students. Faith and Karena returned to their apartment around 3am. Around 4:30am, Karena left the apartment once more, when she was picked up by another fellow Chapel Hill student, Jordan McCrary. Out of habit, Karena did not lock the door to their apartment when she left.

Hours later, Karena wanted to return home, but was unable to get ahold of Faith for a ride. She instead called one of their mutual friends, Marisol Rangel, to pick her up. Karena and Marisol returned to Karena and Faith’s apartment around 11am. They called out Faith’s name, and when she did not answer, they opened her bedroom door and found Faith’s body partially covered by a bloody comforter on her bedroom floor. Karena immediately called 911 to report that her roommate had been murdered. When police arrived at the grisly scene, they found a paper bag near Faith’s body with words “I’m not stupid bitch jealous” (pictured above on the right) written on it.

While there are many theories about who killed Faith, there have been no arrests in the case. Investigators have not announced any suspects or persons-of-interest. However, it is believed that Faith was killed by somebody she knew. Her case remains unsolved today. [read more] [also on the 'Victims Found By Loved Ones' list] [The Murder of Faith Hedgepeth]

3. The Disappearance of Samuel Pharis
Samuel Pharis vanished from his home in Olivehurst, California on June 13th, 2013. The 21 year-old was struggling with substance abuse in the months leading up to his disappearance. In fact, two days before his disappearance, his father Rex Pharis caught Samuel stealing painkillers from him, and he was reportedly furious over it. According to Samuel's fiance, he decided to get clean once and for all after this incident.

On the evening of his disappearance, Samuel left his home around 6:45pm. It appeared that he intended to come back within a few minutes—he left the lights on, the dogs in the kennel, and a fresh cup of tea on the table. Unfortunately, he never returned and has never been seen or heard from again. Samuel's car was found abandoned three days later.

Investigators immediately noted that Samuel's father, Rex, behaved oddly after his son's disappearance. Investigators stated that Rex withheld information to law enforcement. He was also given a polygraph test, and the results were inconclusive. Rex also gave detectives a typed note that he claimed was from Samuel. It read, “You think I’m gone, Oh, how wrong! You’ll see me soon, right around noon. SP.” Interestingly enough, though, investigators do not think Samuel typed up the note himself.

Samuel's case remains unsolved today and his father remains a person of interest, however no arrests have been made in the case. [read more]

2. The Disappearance of Cindy Valle
Cindy Valle was five months pregnant when she vanished on August 26th, 2011. She was only 15 years-old at the time. Cindy mysteriously disappeared from her family's home in Omaha, Nebraska and was never seen or heard from again. Shortly after she vanished, Cindy’s family found a note that she had left under her pillow; it said “I’m living with a lady.” That note is the last known trace of Cindy. Authorities classified Cindy as a runaway from the get-go, but they still appealed to the public looking for tips. According to Cindy’s mother, no tips ever came in concerning her daughter’s whereabouts. Unfortunately, there are very few other details available about Cindy's disappearance. Her baby was due in December 2011, however there is currently no known record of that child being born. Cindy's case remains unsolved. [also on the Missing & Pregnant list]

1. The Disappearance of Tamra Keepness
Tamra Jewel Keepness was only five years-old when she vanished from her family’s Regina, Saskatchewan home on July 6th, 2004. Tamra and her family members are First Nations, and the neighborhood they lived in prior to Tamra’s disappearance was known for having First Nations residents. Tamra vanished sometime throughout the evening, but nobody knew she was missing until the following morning. When her mother, Lorena, awoke on the morning of her disappearance, she asked her 8 year-old son/Tamra's brother Rayne if he had seen Tamra. Rayne told his mother that he slept on the floor, up against the mattress that Tamra fell asleep on the previous night. He said he felt Tamra get out of bed at some point that morning, but nobody had actually seen her since the previous evening. The family searched for her for about an hour and a half before calling the police and reporting Tamra missing.

Years passed without any sign of Tamra. Then, in 2014, a handwritten note surfaced on Reddit. A user posted a hand-drawn map of Muscowpetung (pictured above) with the words: “Location of Tamra Keepness, check the wells.” The Reddit user later wrote that the map belonged to their grandmother, but had come from a great-aunt who had visited an inmate in Alberta. It is unclear who exactly drew the map. Investigators searched 21 wells around Muscowpetung but found nothing. It is unclear if police believe that this note has in authenticity or and the identity of the person who posted the map is unknown. Tamra's case remains unsolved today. [read more]

Previously on the list:
The Disappearance and Murder of Megan Nichols
at July 06, 2019