The Disappearance of Melissa Bohm 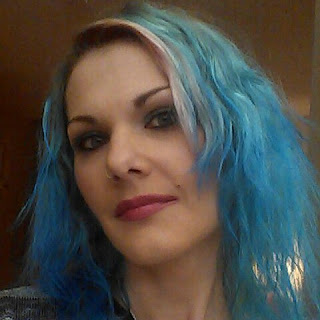 Melissa Bohm has reportedly been missing since February 2018. The 38 year-old woman last spoke to her family members on November 24th, 2017--but she continued to be active on Facebook up until February 9th, 2018. Melissa's final Facebook post occurred at 7:11pm that evening. The post included a picture of her dog, Lola, and an announcement that she had been approved for an apartment. After this post, Melissa seemingly vanished and has never been seen or heard from again. 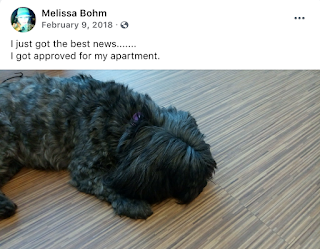 Various reports state that Melissa had been living a transient lifestyle in the years leading up to her disappearance. Shortly before she vanished, though, Melissa had reportedly been living in an apartment in Portland, Oregon. However, Melissa's final Facebook post about getting approved for another apartment was believed to be in reference to an apartment in Seattle, Washington. It is unclear if Melissa actually traveled to Seattle after the Facebook post was made. There are very few details about the circumstances around Melissa's disappearance and very little information has been spread in the media.

Melissa's case is riddled with more questions than answers. It's unclear when, exactly, she vanished--but it appears that Melissa might have dropped out of sight shortly after her final Facebook post was made. She never replied to any of the comments on the post. Then, weeks after the post was made, a man claiming to be Melissa's ex-boyfriend commented. The comments from the ex-boyfriend appear to be positive on a surface level, but the subsequent replies to his comments suggest that there is much more to the story.
-

Her ex-boyfriend commented, "I miss you biskets please hit me up I live in tacoma off 66th and ferdinand I would love to see you." Just minutes later, he wrote another comment, stating, "I hope everything is going good for you and you found yourself again. I've never stopped loving you and am here for you if you need me. I opened my tile business again and things are lookin up. Give Lola a hug and kiss from her dad and please get a hold of me i miss love you two very much."

When a person replied to question if the ex was still seeing Melissa, he replied, "No she yold (sic) everyone we broke up when I was in jail and she lost everything I owned including my car and I just came to realize she didnt love me at all. She just used me." 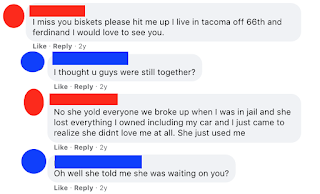 Another person replied to the ex-boyfriend's second comment, stating "I thought you were engaged to someone else you dork." The ex replied, "I am but I still care about Taylor I need to know if shes ok I've been hear some disturbing shit brother." There is no further elaboration on the "disturbing shit" that the ex reportedly heard and it's unclear if this information has ever been investigated by authorities. 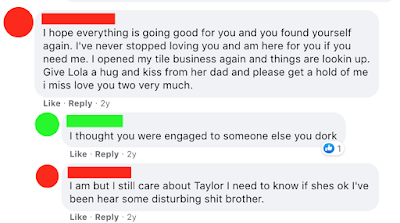 If the comments posted are true, it also appears that Melissa's reported ex-boyfriend got engaged to another person very shortly after their reported break-up-which raises questions about a potential love triangle. Additionally, the ex initially made these comments under the guise of being concerned about Melissa (who he seemingly refers to as Taylor in the above comment)--but the subsequent comments suggest that he might have more information about her disappearance.
Months later, on September 22nd, 2018, Melissa's sister commented on the post to ask any of the previous commenters if they had seen or heard from Melissa. The comment did not receive any replies. In March 2019, Melissa's sister commented on a post made by the reported ex-boyfriend, asking him to reach out to her. Two months later, Melissa's stepmother made a similar comment. Neither women received a reply to their comments. It's unclear if they were ever able to get in touch with him. 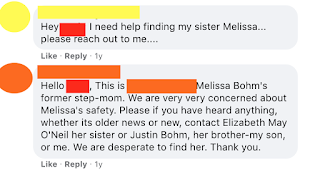 Since then, there has seemingly been very little information about Melissa's disappearance in the mainstream media or on social media. Although Melissa was living in Oregon or Washington around the time of her disappearance, her page on the Charley Project states that authorities in Taunton, Massachusetts are investigating her disappearance. It's possible that Melissa has ties to that area through family or work, but there are no other reports that mention Taunton in regards to her disappearance.
Melissa remains missing today. Her family continues to search for her. If you have any information about Melissa's whereabouts, please contact 508-824-7522.
at December 16, 2020