The Murder of Kaylah Hodges


Two days after Kaylah posted the about image, on October 3rd, 2016, Kaylah was murdered by her ex-boyfriend Ethan Reid (23).

Kaylah and Ethan shared a 7 month old daughter together. They broke up some time after their daughter’s birth. Ethan had allegedly been abusive towards Kaylah, however Kaylah still maintained a good relationship with his mother, April Riley. Kaylah and her daughter lived with April at her residence in Scottsville, Kentucky.

On the night of Kaylah’s death, Ethan showed up at his mother’s residence armed with a rifle. April, who was asleep at the time, was awoken by Kaylah telling her that Ethan had entered the house and that he was armed. April attempted to speak to Ethan as he stood by the front door. He ended up shoving his mother out of the house. April then ran back inside and grabbed Kaylah and Ethan’s infant daughter and was once again shoved against the wall by Ethan as he followed Kaylah out of the house as she tried to flee. Before Kaylah could get away, Ethan shot her in the back and she collapsed. By this point, a neighbor was able to intervene; said neighbor disarmed and detained Ethan until law enforcement arrived. Once they arrived, Ethan was arrested and charged with first degree murder. Kaylah was taken to a hospital where she later died.

Just minutes before the murder, Ethan posted an apology message on Facebook. It read: “Sorry guys. I’m truly not this bad of a person. I’ve been pushed to this point over of time. I’m dissapointed in myself too. I could have been so much more. It’s so sad. I’m a terrible person overall. Learn from my mistakes. Just know this was never my intentions. I love all of you. I’m just not meant to be happy. Ever. I’m sorry. I love you all. Xoxo.” 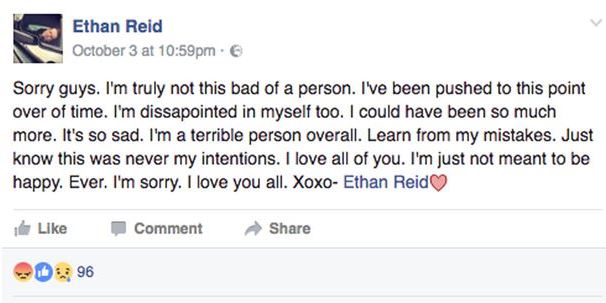 On September 13th, 2017, Ethan plead guilty to murdering Kaylah. He was later sentenced to 35 years in prison.

-
Lists including this case:
[Cases of Break-Up Violence][Cases with a Social Media Trail]