As per request, I have compiled a list of cases that involve dismemberment of the victim. Some of these cases are resolved, some are unsolved, and some are pending--but all of the crimes are horrific. Below is a list of 5 of these tragic cases.

5. Justin Barnett
Justin Barnett (23) was murdered in a robbery-gone-bad by Tricia Abney and her boyfriend Jeff Martin. On the evening of June 3rd, 1995, Tricia and Jeff lured Justin to their Birmingham, Alabama apartment with the intention of stealing from him. When things went awry, Tricia and Jeff ended up stabbing Justin to death before dragging his body to their bathroom and dismembering him. In the midst of the dismemberment, Tricia's 18 year-old brother Johnathan Abney entered Tricia and Jeff's apartment and saw Justin's body parts scattered across the bathroom floor. The couple then enlisted Johnathan's help in disposing of the body in Bibb County.

Justin was reported missing by his loved ones, but his case quickly went cold. Then, in January 2015, Johnathan found himself overcome with guilt. He went to the police and told them that he had a secret he could no longer live with--and it involved a murder that occurred 20 years earlier. Johnathan then explained to police the details of Justin's murder and disposal. He told police where the remains could be found, but unfortunately police were unable to recover them. Johnathan continued to work with the police for 5 months before police finally received warrants of Jeff and Tricia's arrests in June 2015. Tricia was taken into custody first, and Jeff shot and killed himself shortly after Tricia's arrest.  Johnathan himself was given immunity due to his cooperation with investigators.

Tricia went to trial in 2017. She was found guilty and given a sentence of life in prison without the possibility of parole. [read more]

4. Carly 'Charli' Scott
Charli Scott (27) was murdered by her ex-boyfriend Steven Capobianco (24) on February 9th, 2014. At the time, Charli was pregnant with Steven's child--even though the couple had broken up and Steven was dating another woman. Steven did not want children and he begged Charli to get an abortion, but she wanted to keep the child and was excited about being a mother.

On the evening of February 9th, Steven asked Charli to come assist him with his vehicle, which he claimed had gotten stuck in a ditch along Hana Highway in Hawaii. Charli drove out there to help him, and at some point, he got inside Charli's vehicle. Equipped with a knife, Steven stabbed Charli 20 times in the stomach. Then, he dismembered her jaw disposed of it in the woods. Charli was reported missing by her family members on February 10th, 2014. Three days later, while searching, Charli's sister found her bloodstained clothes in a wooded area near Nua'ailua Bay. This prompted a massive search by detectives, during which Charli's jawbone was found. It had been broken in half. The rest of her body has never been recovered.

Months later, in July 2014, Steven was arrested and charged with Charli's murder. He pleaded not guilty but was ultimately found guilty of all charges. He remains behind bars today. [read more] 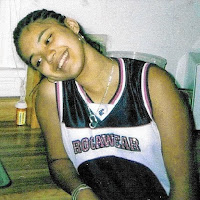 Alexandra (Alex) Anaya was only 13 years-old when she was brutally murdered in August 2005. The teen vanished from her family’s Hammond, Indiana home on August 13th. Just three days later, Alex’s torso was found floating in Little Calumet River in Chicago. She had been dismembered, and the rest of her body has never been recovered.

No arrests have ever been made for Alex’s death. Her mother’s ex-boyfriend was tried in federal court shortly after Alex’s disappearance on charges of stalking the family, but he was eventually acquitted. He has never been named as a suspect in Alex’s case. However, investigators do believe that Alex knew her killer. The FBI has taken over the investigation into Alex's murder, which remains unsolved today. [read more]

2. Sydney Loofe
Sydney Loofe (24) met Bailey Boswell (23) on Tinder in November 2017. The two girls agreed to meet up for a date, which Sydney thought went very well. The two arranged to meet up for a second date on November 15th, 2017. Unbeknownst to Sydney, Bailey was already in a long-term relationship with an older man named Aubrey Trail (53), whom she lived with at their home in Lincoln, Nebraska.

Sydney never returned home from her second date with Bailey and was reported missing the following day. Police quickly identified Bailey and Aubrey as persons of interest in the case, however they continuously denied having anything to do with Sydney's disappearance. When police showed up at their house to question them, they were nowhere to be found. Through a series of Facebook videos, it was revealed that Bailey and Aubrey were on the run from the police because they had warrants out for their arrests on unrelated charges. They eventually turned themselves in and were arrested for the unrelated charges. Just days later, Sydney's dismembered body was found in a rural area of Clay County, Nebraska.

Months later, on June 11th, 2018, Bailey and Aubrey were charged with first-degree murder and improper disposal of human skeletal remains in the killing of Sydney Loofe. It was then that even more evidence of the couple’s guilt was revealed. According to court documents, Sydney and Bailey met for their first date on November 14th, 2017. At the end of that date, they decided to meet up the following night for a second date. Around 10:35am the following day, hours before the planned second date, Bailey and Aubrey were captured by surveillance footage at Home Depot purchasing the tools and supplies believed to have been used in the dismemberment and disposal of Sydney. This particular clue indicates that the killing was premeditated, because Sydney was still alive at the time the purchase was made. Both Bailey and Aubrey remain behind bars as their cases are pending. [read more]

1. Becky Watts
Becky Watts (16) was murdered inside her family's Bristol, England home on February 19th, 2015. Becky's murderer was her stepbrother, Nathan Matthews (28). On the day she was killed, Nathan entered the Watts home with his long-term girlfriend Shauna Hoare (21). Nathan and Shauna both shared inappropriate fantasies that centered around teenage girls. Prosecutors believe that Nathan entered Becky's bedroom with the intention of kidnapping her so he and Shauna could fulfill their sick fantasies. However, things did not go according to plan. Matthew slipped into Becky's bedroom that day wearing a mask. He put tape over her mouth and then struggled to get her inside a suitcase so he could transport her out of the house. While Becky fought back, Nathan put his hands our her neck, restricting her breathing. At some point, Nathan checked for a pulse, and realized Becky was dead. He placed her body in the suitcase and then put it in the trunk of his car.

Back at the home he shared with Shauna, Nathan dismembered his stepsister's body using a knife and a saw. He then put her body parts into different bags and disposed of her in multiple different places. Police eventually found her remains and both Nathan and Shauna were arrested for Becky's murder and improper disposal of a corpse. Shauna claimed she had no knowledge of the event, though prosecutors believe she helped plan the kidnapping and assisted with her disposal.