The Disappearance of Kortne Stouffer 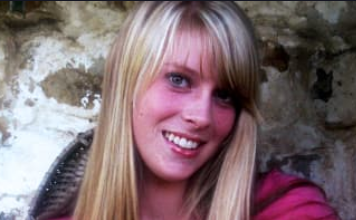 Kortne Stouffer (21) disappeared from Palmyra, Pennsylvania on July 29th, 2012. On the night before her disappearance, Kortne and her boyfriend Bradley (20) were having a party at the apartment they shared. Around 9pm, police arrived at the apartment after receiving a call about suspicions of underage drinking. Bradley, who was already on probation and house arrest for driving under the influence while underage, was arrested. Kortne was infuriated by Bradley’s arrest and placed the blame upon her neighbors because she believed they called the police after seeing one of Bradley’s friends carrying beer into the apartment building earlier that day. According to Kortne’s friends, she had already been having problems with said neighbors because she felt that they were busybodies.

In an attempt to calm Kortne down, her friends convinced her to go out to a bar in the nearby town of Harrisburg. However, the alcohol only seemed to add fuel to Kortne’s anger, and she was kicked out of the bar after getting into a screaming match with another guy and his girlfriend. Kortne headed back to her apartment with her old friend, Cody Pruett (21).

When they arrived back to the apartment building, a still very angry Kortne encountered her neighbors and starting screaming and yelling at them. One of those neighbors was Todd Saksek (44), who lived in the apartment below Kortne and Bradley. Witnesses said that they saw Todd and Kortne standing “chest-to-chest”, screaming at each other. The police were called for a second time and arrived around 3am.

The police stayed until about 4am until everyone returned to their respective apartments. However, less than 30 minutes later, Todd called the police again after claiming that Kortne and Cody were stomping around her apartment. When they arrived, they noticed that the lights in Kortne’s apartment were off and they did not hear any noise—assuming the chaos had stopped, they let it go and left the apartment without knocking on the door. They did knock on Todd’s door before leaving the building, but he did not answer the door. Cody said that he fell asleep shortly after the stomping stopped and he woke up later that morning around 7:30am, Kortne was gone. She has not been seen or heard from ever again.

Police have not named any suspects or persons of interest in Kortne’s case. There were no signs of a struggle at Kortne’s apartment, or any signs of a covered up crime scene. Since he was the last known person to see Kortne, Cody was interrogated and was ultimately cleared of suspicion.

There is a $50,000 reward in place for tips that lead to Kortne’s whereabouts. If you have any information, you can submit a tip here.

Lists including this case:
[Drinking & Disappearing][Vanished After Fighting]
at August 10, 2019