The Disappearance of Brandon Swanson 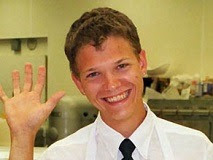 19 year-old Brandon Swanson disappeared during the early morning hours of May 14th, 2008. He vanished after driving his car (pictured below) into a ditch while on the way to his family’s Marshall, Minnesota home.

The previous day, Brandon had completed his first year of classes at Minnesota West Community and Technical College, and he went out with a few friends to celebrate. He decided to head home around midnight. At some point shortly thereafter, Brandon accidentally drove his car into a ditch. He was not injured in the accident, but his car was stuck. He called his parents around 12:30am and told them that he had gotten his car stuck near the town of Lynd. Brandon’s parents immediately headed out there to pick him up, but they were unable to locate him. Brandon called his father back and told him that he could see the lights from the town, and he was going to walk towards it and meet them there. He remained on the phone with his father for the next 45 minutes as he walked towards his destination. Brandon and his parents continued to look for each other to no avail. Then, shortly after 2am, Brandon’s father heard Brandon abruptly shout “oh shit!” before their phone call was disconnected. Brandon’s parents continued to look for him for a few hours before finally calling the police at 6:30am.

Police looked into Brandon’s cell phone records later that day, which revealed that Brandon had actually called his parents from the city of Porter, located 25 miles way from Lynd. Police then went to that area, where they found Brandon’s car stuck a ditch in nearby Taunton County. It is unclear if Brandon was aware that he was not actually in Lynd.

It was theorized that Brandon might’ve drowned after falling into the Yellow Medicine River, which is located near the area his car was found. However, extensive searches of the river have not found a body. There have also been numerous land searches of the surrounding areas that have also not produced any clues. Brandon’s parents do not believe he fell into the river; they stated that he was not clumsy nor did he sound disoriented while he was on the phone with them. Despite the fact that Brandon crashed his car and might’ve been unaware of his location, it is not believed that he was drunk, either. Brandon’s friends said that he did have a “drink or two” at the celebration, but he was not noticeably intoxicated.

Investigators are still looking for leads/clues in Brandon’s case. If you have any information that could lead to his whereabouts, please contact the Lincoln County Sheriff’s Department at 507-694-1664.