As explained in the original 'Betrayed by Blood' list, over 50% of the murder victims each year are killed by someone known to them--such as a significant other, acquaintance, co-worker, etc. Out of the 50% of murder victims killed by someone known to them, almost half of those victims are killed by members of their own family. Below is a list of five more cases in which the victim was killed by a member of their family, and ultimately betrayed by their own blood.

Pamela Hargan (63) and her daughter Helen Hargan (23) were found shot to death in Pamela’s McLean, Virginia home on July 14th, 2017. When their bodies were first discovered by the Fairfax County police, it was believed the deaths were a murder-suicide. In fact, it was originally reported that Helen killed her own mother before turning the gun on herself. However, within days investigators found evidence that suggested that something else happened. Investigators eventually declared that Pamela and Helen had been murdered, and the crime scene had been staged to look like a murder-suicide.
For over a year, investigators did not reveal if Pamela’s older daughter/Helen’s older sister Megan Hargan (35) was a suspect or not. They did, however, reveal that Megan had attempted to make fraudulent wire transfers from Pamela’s financial account on the day of the murders. After several months of investigating, Megan was finally arrested and charged with the murders of her mother and sister in November 2018. Other relatives of the Hargans state that they are not surprised by Megan’s arrest at all. Pamela’s sister Tammy North said that she believes the murders were motivated by money and jealousy. Pamela had recently bought Helen a house that she was preparing to move into before she was killed. Tammy believes that Megan was jealous about this, as she and her 7 year-old daughter could not afford to move out of Pamela’s home.
Megan remains behind bars as the charges are pending. [read more]
MaSarah Ross
MaSarah (pictured left) and her mother, Ronkeya, were both murdered by MaSarah's father, Lester Ross 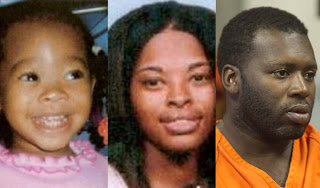 During 2009, 3 year-old MaSarah Ross lived with her father, Lester Ross, and her stepmother, Sharon Ross in Haines City, Florida. MaSarah's mother/Lester's ex Ronkeya Holmes made plans to pick MaSarah up for a visit on October 18th, 2009. Unbeknownst to Ronkeya, she would not be able to pick up her daughter that day. MaSarah had already been dead for months. Lester had killed her and hid her body inside of a freezer at his home. He told his wife Sharon that MaSarah’s death was an accident, but still reportedly threatened to kill Sharon if she ever told anybody about it. Lester had allegedly been abusive towards Sharon for years and she reportedly feared for her life during this time.
In order to hide the fact that he had murdered his own daughter, Lester decided that he had to kill Ronkeya as well. Before Ronkeya arrived at their home on October 18th, Lester asked Sharon to buy rat poison and melt the pellets on the stove. He then instructed her to mix the rat poison into a bottle of Coke from their refrigerator. Sharon followed Lester’s commands, and then left the Coke bottle on their kitchen counter.
At some point, Lester gave the Coke to Ronkeya. A few hours later, Sharon stumbled upon Lester with Ronkeya’s lifeless body inside his home office. Lester forced Sharon to help him move both Ronkeya and MaSarah’s bodies into his car. He then forced Sharon to drive to an orange grove in Winter Haven to help bury their bodies. Over a year later, in December 2010, Sharon lead authorities to their grave sites. It took over a year for the remains of Ronkeya and MaSarah to be positively identified, but once they were, Lester was indicted on murder charges. In 2015, he was sentenced to life in prison without the possibility of parole. [read more]

Alexus Watkins
Murdered at the age of 20 by her 16 year-old brother, Kevon Watkins

Alexus Watkins was murdered by her younger brother, Kevon Watkins, on February 3rd 2018. At the time of the murder, Alexus and Kevon lived with their mother Latoya Watkins in Macon Georgia. Similar to many 16 year-olds, Kevon enjoyed playing online video games. In fact, on the day of the murder, Kevon changed the password to the family's WiFi connection in an attempt to block his siblings and mother from slowing down the internet while he played video games. When Latoya learned this, she unplugged the internet router and took it into her bedroom. Kevon then went to her room to confront his mother.
According to Latoya, it appeared that Kevon was about to hit her--which is when Alexus intervened. Alexus ran into the room and grabbed her brother, and that point, he began to take out his anger on his sister rather than his mother. A struggle ensued between the two, but according to Latoya, it did not seem like a serious fight at first. Then, Kevon began to choke Alexus. Both their younger sibling and Latoya attempted to pull Kevon off Alexus to no avail. Eventually, Latoya called the police. Paramedics attempted to revive Alexus once they arrived, but unfortunately it was too late. She died at the hospital just a few hours later.
Kevon was arrested on the scene and charged with murder. During the summer of 2019, he waived his right to a jury trial and opted to have a judge hear his testimony instead. His defense attorneys argued that he did not intend to kill Alexus, however the prosecutors argued that he did intentionally choose to put her in a chokehold which resulted in her death. The judge ultimately found Kevon guilty of the murder charges. In August 2019, he was sentenced to life in prison. [read more]
Billy Fretwell
Billy and his mother, Karissa, were both allegedly murdered by Billy's father, Michael Wolfe 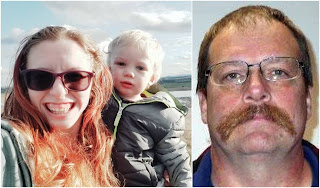 Billy Fretwell (3) and his mother, Karissa Fretwell (25) vanished from their home in Salem, Oregon on May 13th, 2019. Concerns for their safety immediately arose, especially because Karissa was in a contentious situation with Billy's father, Michael Wolfe. Karissa and Michael had an affair years earlier that resulted in Karissa getting pregnant with Billy. Michael reportedly wanted Karissa to have an abortion, but she refused. Michael had no plans to leave his wife.
A few months before Billy and Karissa vanished, Karissa sought child support from Michael. A judge granted that request, which Michael was unhappy about. He became an immediate suspect in the disappearances of both Billy and Karissa--and nearly two weeks after they were reported missing, he was arrested and charged with murdering them both. Their remains were found a few weeks later, on June 15th.
Michael remains behind bars as his charges are pending. [read more]
Jamie Haggard
Allegedly murdered by her half-brother, David Haggard 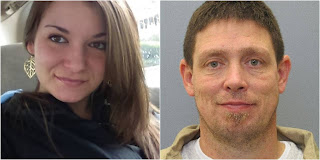 Jamie Haggard (27) vanished in Kenmore, Washington on June 9th, 2016. Two years later, her dismembered remains were found in a suitcase in a wooded area in Snohomish County. Jamie's death was classified as a homicide but no arrests were immediately made.
Over a year later, in October 2019, Jamie's half-brother David Haggard was arrested and charged with her murder. The two reportedly lived together around the time of Jamie's disappearance, and they often argued about their house and drug use. Just days before her disappearance, Jamie told friends that she feared for her life. Another friend reportedly called the police after David allegedly sent him a picture of Jamie tied up in a bathtub. By time the police arrived at the house, Jamie denied that her brother had hurt her and instead blamed it on another roommate in the house.
According to court documents, Jamie and David fought on the morning of her disappearance--and then Jamie's loved ones never saw or heard from her again. Prosecutors believe that David killed Jamie that day before dismembering her and setting her remains on fire. He remains behind bars as the charges are pending. [read more]
at September 29, 2020