Timeline: The Many Crimes & Confessions of Kylr Yust

Kylr Yust (30) is currently behind bars awaiting trials for the murders of Kara Kopetsky and Jessica Runions.  Kylr has been a suspect in Kara's case ever since she vanished in 2007. In the years that following Kara's disappearance, Kylr confessed to various different people that he was involved in Kara's disappearance. Then, in September 2016, he became the prime suspect in the disappearance of another young girl: 21 year-old Jessica Runions. The remains of both girls were found in a similar location in Cass County during April 2017. In October 2017, Kylr was charged with murder. The following timeline provides details of Kylr's case, from the time he met Kara until the time he was charged with murdering both her and Jessica.

April 28th, 2007: Kara visits the Belton Police Department to report that Kylr had forced her into his car earlier that evening as she was leaving a fast food restaurant. He drove to Grandview before eventually letting her go.

April 30th, 2007: Kara files for an order of protection against Kylr. 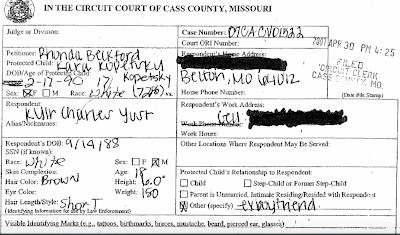 May 1st, 2007: Kylr is served with the order of protection. He is told that he is not to have any contact with Kara.

Morning of May 4th, 2007 (time unknown): Kara calls a male friend and asks if she and Kylr can come over to his house to hang out. He declines, and states that he is too busy.

May 4th, 2007, 9:19am: Kara is seen unexpectedly leaving school early. She never returns home.
May 4th, 2007, 12:30pm: Kylr unexpectedly shows up at the home of the friend Kara called earlier that morning. He later starts frantically crying, explaining to the friend that he had been with Kara earlier that day, but did not anyone to know about it because he did not want to get in trouble for violating the order of protection. After Kylr left the friend's house, said friend continuously tried to call Kara, but the calls went unanswered.

Evening of May 4th, 2007: After Kara fails to show up at her job at Popeyes or to return to her family's home, she is reported missing by her mother.
May 6th, 2007: Police question Kylr for the first time about Kara's disappearance. He admits that to kidnapping Kara the previous week, prompting the order of protection--but he denies any involvement in her disappearance.

July 23rd, 2007: Police question Kylr again. This time, he admits that he violated the order of protection and spoke to Kara on the phone on the evening of May 3rd. Kylr tells investigators that he and Kara got into an argument after Kylr accused Kara of planning to "spend the weekend partying and running around on him" with another man. He still denies involvement in her disappearance.

2009: Kylr drunkenly confesses to a former roommate/bandmate that he "snapped" and killed Kara because she "refused to love him."


January 22nd, 2011: A young woman contacts police and tells them that Kylr told her that he choked Kara to death and disposed of her body in the woods.

February 2nd, 2011: The same woman calls police again, and states that Kylr once again confessed to killing Kara. This time, the woman stated that Kylr "described watching the victim breathe her last breath and falling back against a chair and staring at her body for a short time before packing her up and placing her body in the woods."

September 2011: Kylr is arrested on assault and animal abuse charges.

June 5th, 2012: Another witness contacts police and states that Kylr confessed to killing Kara, and described the event with details similar to his previous reported confessions.

November 22nd, 2013: Kylr is sentenced to 4 years in prison for the drug trafficking charges.

September 2015: A Belton detective visits Kylr at a federal prison in Oklahoma. Kylr refuses to answer any questions about Kara's disappearance.

March 28th, 2016: A former cellmate of Kylr contacts Belton police and tells them that Kylr was worried after the September 2015 interview. According to the cellmate, Kylr asked him for help establishing an alibi before breaking down and ultimately admitting to killing Kara.

September 2nd, 2016: Kylr is released from prison, and placed on supervised release.

September 8th, 2016: Kylr attends a party in Grandview, Missouri. Also in attendance is 21 year-old Jessica Runions.
September 9th, 2016, around 2am: Jessica and Kylr are seen leaving the party together. Kylr was drinking heavily and the two had reportedly been seen arguing. Jessica never returns home from the party.

September 10th, 2016: Kylr Yust's half-brother, Jessep Carter, contacts police and tells them that he was present when Kylr burned Jessica's car. He also stated that Kylr admitted that he strangled Jessica and disposed of her body in the woods.

September 11th, 2016: Kylr is arrested at Jessep's house. He is charged with knowingly burning Jessica's vehicle.

October 5th, 2016: Following this arrest, another former roommate of Kylr's comes forward and states that Kylr confessed to killing Kara Kopetsky during a conversation that had taken place three years earlier.

April 3rd, 2017: A mushroom hunter finds a set of remains in a rural area of Cass County, Missouri. When authorities arrive and conduct a more thorough search of the area, they find a second set of remains. Those remains appear to have been there for much longer than the first set of remains that were found.

April 5th, 2017: The first set of remains are identified as that of Jessica Runions.

August 17th, 2017: The second set of remains are identified as that of Kara Kopetsky.

October 6th, 2017: Kylr is finally charged with the murders of Kara Kopetsky and Jessica Runions. He is scheduled to go on trial in fall of 2019.

Kara's case is featured on season 2 of Disappeared and season 1 of Vanished With Beth Holloway.
at June 09, 2019