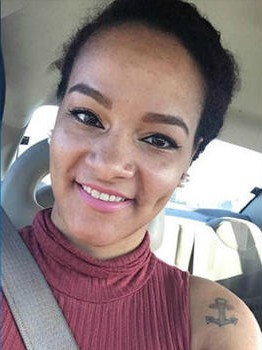 Typhenie Johnson (25) has been missing since October 10th, 2016. She was last seen at her apartment complex in Fort Worth, Texas, with her on-again, off-again boyfriend Christopher Revill (34). The two were in an argument, and Typhenie was apparently heard telling Revill that “it was over” around 9pm.

After a few minutes of silence, Typhenie’s brother Asher Johnson went outside to look for his sister. Asher couldn’t find Typhenie, but he did witness Revill slamming the trunk of his car shut and then driving off. On the ground where Revill was parked, Asher found Typhenie’s sock and cellphone. He immediately called the police.

The following day, police arrested Revill and charged him with aggravated kidnapping with intent to terrorize in Typhenie’s case. The charge was later upgraded to kidnapping with intent to kill. Revill denied all charges brought against him; he told investigators that he and Typhenie got into an argument and she got into a vehicle driven by someone he didn’t know and rode away.

Throughout the investigation, Typhenie’s family learned that a previous girlfriend of Revill’s had also vanished, ten years earlier. This missing woman’s name is Taalibah Islam (20), who vanished on January 16th, 2006. Much like Typhenie, Taalibah was last known to be seen by Christopher Revill. In fact, when Taalibah disappeared in 2006, Revill apparently told investigators that he and Taalibah got into an argument and she got into a vehicle driven by someone he didn’t know and rode away. Ten years later, Revill told investigators an eerily similar story regarding Typhenie’s disappearance.

Despite being in custody, Revill is still not talking and has not given any up any information regarding Typhenie’s whereabouts. His trial is pending. In the mean time, Typhenie’s family is offering a $6,000 reward for information that leads to her location. Anyone with information can call the tip line at 817-713-2888.
--
UPDATE (8/22/19): Christopher Revill has been found guilty for the kidnapping of Typhenie Johnson. At trial, it was revealed that Revill's footprints were found in his parent's backyard next to a a shirt, a torn bra, and a broken fitness tracker that all belonged to Typhenie. His defense attorneys argued that Revill's arrest was a result of "lazy and sloppy" police work. The jury disagreed and ultimately convicted him for kidnapping. Christopher was sentenced to life in prison.