The Disappearance and Murder of Anjelica 'AJ' Hadsell

Anjelica 'AJ' Hadsell vanished from Norfolk, Virginia at the age of 18 on March 2nd, 2015. At the time, AJ was a freshman at Longwood University and when she vanished, she was visiting her hometown while on spring break. When news about AJ's disappearance was initially reported, it was believed that AJ was last seen by a neighbor while driving away from her mother’s home on Millard Street. However, suspicion quickly fell upon AJ’s adopted father/ex-stepfather, Wesley Hadsell (pictured below). The day AJ was last seen, Wesley abruptly left his job around noon after telling his co-workers that he had to meet up with his daughter to give her some money. He returned about two hours later, but his co-workers stated that he appeared agitated upon his return and he ended up needing to take the rest of the day off.

Initially, it appeared that Wesley was going to great lengths to deflect suspicion away from him. In fact, within the first week of AJ’s disappearance, Wesley broke into a home and reportedly “found” AJ’s jacket. He claimed that the person who lived in said home kidnapped AJ, which is why her jacket was there. Wesley was arrested for breaking and entering after that, and many suspected that he actually planted the jacket there himself. At this point, Wesley was officially named a person of interest in AJ’s disappearance. The 38 year-old was already no stranger to the police–he was a convicted felon with previous bank robbery and burglary convictions. 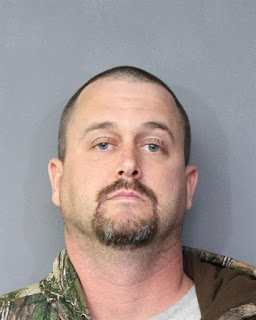 As the investigation into AJ's disappearance continued, Wesley continued to publicly deny harming AJ, even after the investigators searched his motel room and seized his van. Inside the motel room, investigators found several rounds of ammunition; which he is forbidden to own as a felon. Inside the vehicle, investigators found a shovel, duct tape, and a pair of black work gloves. In April 2015, investigators received an analysis report on the van’s GPS, which revealed that it had been driven to an abandoned home close to the North Carolina border on the day AJ vanished. The report states that the van remained on the property for about 20 minutes. On April 9th, 2015 detectives went to the property and found AJ’s body buried in a ditch behind the abandoned home. News about AJ’s body being found spread quickly, but no arrests were made and investigators did not immediately reveal how they came across the property she was found on.

An autopsy revealed that AJ died of “acute heroin poisoning and homicidal violence.” Despite these findings, police still did not arrest or charge Wesley with anything related to AJ’s death. Instead, they pursued unrelated charges for unlawful possession of ammunition. Wesley was initially sentenced to 20 years for these charges, however he was re-sentenced in early November 2018 to 10 years. Around the time of these court proceedings, other court documents related to AJ’s case were unsealed. The documents reveal that another currently unidentified inmate stated that he “helped” Wesley with AJ’s disappearance, yet he did not reveal when or how. Just a few weeks later, on November 19th, 2018, Wesley was officially charged for AJ’s murder. It is unclear if the information in the unsealed documents led to the murder charges. A motive for AJ’s murder remains unclear at this time as well.

Many people strongly suspected he was responsible for AJ’s disappearance/death since the beginning, and AJ’s loved ones are glad to finally see that he has been charged. He currently remains behind bars and he awaits further proceedings.

-
UPDATE (Feb. 2020): Wesley Hadsell's murder trial began earlier this week, however on the second day in court a mistrial was declared. The judge overseeing the case declared a mistrial after Wesley reportedly decided he did not want to keep an agreement that his defense team had made with the prosecution prior to the trial beginning. The agreement regarded which parts of Wesley's previous criminal records would be brought up during the trial. Due to the fact that Wesley changed his mind about said agreement after the trial was underway, the prosecution did not have time to restructure their case and therefore asked the judge to declare a mistrial. A new trial is scheduled to begin in May 2020.