The Suspicious Death of Jill Wells 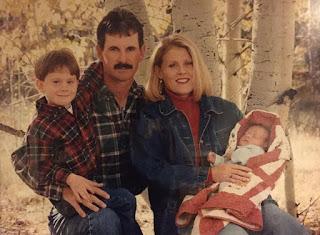 Jill Wells was 36 years-old when she died under suspicious circumstances on March 28th, 2001. The mother of two spent that day doing target practice with her husband Mike Wells and their six year-old son, Tanner Wells.  The three were shooting on a remote ranch outside of Punkin Center, Colorado. At 1:48pm, Lincoln County dispatch received a 911 call from Mike. He told the dispatcher that his wife had accidentally been shot and killed. The dispatcher then passed the call to Lincoln County Undersheriff Adam Yowell. Yowell asked Mike what happened, to which he replied, "My wife and my son and I were out target shooting. And he turned the gun and it went off and shot her. I don’t even know where he hit her. But get somebody down here, please."

First responders rushed to the scene, but due to the remote area of the ranch, it took around 20 minutes for them to show up. When they arrived, they found Jill on her stomach on an old foam mattress with a rifle in her right hand. She had a single bullet wound just above her ear. It was clear that she was deceased. Mike was once again asked what happened, and he explained that Tanner had been shooting with a child's rifle, but asked if he could fire one shot out of the "big gun". Mike obliged Tanner's request and allowed him to fire a single shot out of his .22 caliber rifle. Mike then said that he turned his back to pick up Tanner's rifle, and when he turned back around, he saw Tanner trying to cock the rifle before it accidentally went off. That was the bullet that reportedly hit Jill, killing her.

Both the prosecutor and the coroner who were sent to the scene honored Mike's story. The coroner took Jill's body straight to a mortuary after deeming that an autopsy was unnecessary. It seemed as if Jill's death was quickly labeled as a tragic accident. However, Jill's family members and friends always felt there was more to the story--and their feelings were not unfounded. In addition to an autopsy not being performed, there were many other things that were seemingly overlooked as well. Investigators did not attempt to identify any fingerprints on the rifle that killed Jill, nor did they did do any ballistics testing. They also did not conduct any in-depth interviews with anyone involved in the case.

As the years passed after her death, Jill's loved ones could not shake the feeling that Jill's case was closed too quickly. A closer look into the details of Jill's relationship with her husband Mike revealed a possibility that perhaps her death was not an accident after all.

From the outside looking in, the Wells' seemed like a family that had it all. Jill worked as a nurse, while Mike owned his own construction business. The couple had two healthy sons. They seemed to be a happy family. However, those closest to Jill said that the family was troubled financially. Mike had children from a previous marriage, and most of Jill's paycheck went towards Mike's child support payments. Jill reportedly told her mother and her friends that she wanted to quit her job so she could stay at home with her sons, but she was unable to due to their financial issues.

Jill also told her mother and friends that Mike was not present emotionally. She suspected that Mike might have been having an affair with a woman who both Jill and Mike were friends with during college. Jill confronted both Mike and the woman about it, and they denied having an affair. Jill apparently chose to believe them, but the suspicions still remained. Additionally, in early 2001--just months before her death--Jill told a co-worker that Mike had asked Jill to buy more life insurance. The day after Jill's death, Mike called the insurance company to collect on her life insurance.

Jill's mother, sisters, and friends were left with more questions than answers after Jill's death. They wanted to talk to Mike about what happened, but he would often dodge the conversation. It also became apparent to many people that Mike was struggling with drug and alcohol addiction. He eventually remarried, but by 2006, their marriage was falling part. During 2007, his third wife moved out of their home and sought a restraining order. She documented that there was an instance of physical abuse in 2006 while Mike was under the influence of drugs. She also stated that Mike had made threats to leave her without any money.

By 2008, Jill's sister Julie Evenson finally decided to demand more answers. During June of that year, Julie went to the Lincoln County Sheriff's Office and asked for Jill's case to be reopened. She spoke to Deputy Alan Leach that afternoon, who asked her to write down a statement regarding her concerns about Jill's case. Julie wrote about several things, including the rumor that Mike had raised Jill's life insurance policy before her death. She also wrote about a story she had heard that Jill's son Tanner had told one of his friends that he did not actually shoot his mother. After hearing Julie's story and reading her statement, Deputy Leach decided to share the information with the county's new sheriff and undersheriff. The three officers then took a look at Jill's case file, and they noticed all the things that were not done in the case--there was no autopsy, no interview reports, no ballistics testing. The Sheriff's Office subsequently decided to reopen Jill's case.

Although Mike had passed, the Sheriff's Office kept the investigation into Jill's death opened. Investigators then noticed that, in addition to the case lacking important information such as an autopsy, it also appeared that there was inaccurate information in the initial report on Jill's death. This was seemingly confirmed by a man named Patrick Leonard, who was one of the EMT first responders on the day of Jill's death. When the case was reopened, Leonard finally got to see the original report on Jill's case. The report stated that Jill was clutching a rifle in her left hand after she was shot. However, Leonard adamantly denies this. He told investigators that he is certain that Jill was holding the rifle with her right hand. Mike also reportedly told investigators that Jill was shooting with her left hand when she died. This report obviously contradicts Leonard's recollection of events--which leads to suspicion that the crime scene might have been staged.

The new sheriff believes that Jill's case could have possibly been classified as a murder if it had been investigated more thoroughly in 2001. In fact, he stated that he does not believe that Tanner was the one to shoot and kill his mother. Tanner, who is now an adult, continues to say that it was him who shot Jill--not his father. Many are still unsure of Tanner's account, and Jill's case remains opened today.
at August 21, 2020