The Murders of Terri Reyes and Shunte Coleman 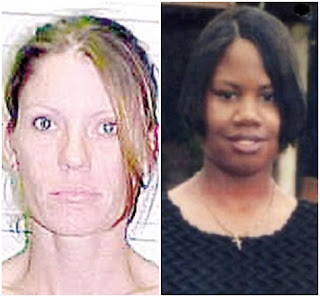 Terri Reyes (left) and Shunte Coleman (right) both vanished in Jacksonville, Texas during 2006. Terri, who was 38 years old at the time, vanished on May 21st, 2006. Shunte, who was 26, vanished about a month and a half later, on July 2nd, 2006. Both women had associations with a Jacksonville police officer named Larry Pugh (pictured below).  In 2005, Pugh was indicted on five counts of violation of civil rights after he was accused of sexually assaulting a woman while on duty. Additionally, numerous other women reported Pugh for sexual assault between 2005 and 2006. Both Terri and Shunte were scheduled to testify against Pugh in court. They both vanished while Pugh was out on bond while awaiting trial.

After Shunte vanished, many began to speculate that her disappearance and Terri's disappearance were connected to Pugh. At the time, police denied this and stated that there was "no evidence" that their disappearances were connected in any way. However, about a month after Shunte's disappearance, in August 2006, Pugh was arrested yet again for assaulting another woman who was also scheduled to testify as a witness in his case. He later admitted to putting a belt around the woman's neck and attempting to drag her to his van. The belt broke, and the woman was able to run to nearby friend's house. Pugh was subsequently charged with retaliation against a witness.

On March 1st, 2007, Pugh was sentenced to 12 years in prison for the initial federal charges. Meanwhile, Terri and Shunte remained missing. A few months later, in June 2007, hunters found human remains in a wooded area in San Augustine County. Those remains were later identified as that of Terri Reyes. Her death was classified as homicide. Pugh still remains the prime suspect in her case.

Years later, in March 2014, another set of human remains were found in a wooded area of San Augustine County--not far from the spot where Terri's remains were found. A few months later, forensic testing confirmed that the remains belonged to Shunte Coleman. Her death was also classified as a homicide. The murders of both Terri and Shunte have only one prime suspect to this day: Larry Pugh.

In 2018, Larry Pugh finished his federal prison sentence. He has still not been charged with anything related to Terri and Shunte's cases. Pugh eventually moved to Nacogdoches County, Texas. Other residents in the county expressed concerns about Pugh living in their community. In 2019, a post began circulating on social media about Pugh being a serial killer and rapist.

At that time, the Nacogdoches County Sheriff's Office announced that, despite the accusations against Pugh, he was not a convicted murderer, nor was he even a registered sex offender. Although he was indicted on federal charges after being accused of sexually assaulting a woman while on duty back in 2005, he was not actually charged with sexual assault--he was only charged on counts of violation of civil rights.

Pugh was later arrested again during early 2020. This time, he was charged with making a false declaration in federal court relating to his 2006 charges of retaliating against a witness. He was sentenced to 18 months in prison for those charges in July 2020. Pugh remains incarcerated and he also remains the prime suspect for the murders of both Terri Reyes and Shunte Coleman. Still, no charges have ever been filed in either one of their cases.