The Disappearance of Heather Elvis 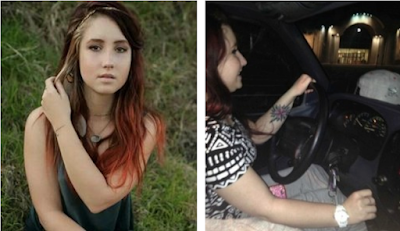 20 year-old Heather Elvis disappeared after going on a first date with an old acquaintance from high school on the evening of December 17th, 2013. During the date, Heather sent the above picture on the right to her father, Terry Elvis, of her driving her date’s stick shift car. That was the last time Terry heard from his daughter. Later, during the early morning hours of December 18th, Heather returned her Myrtle Beach, SC apartment and briefly spoke to her best friend on the phone. Heather’s friends and loved ones have not seen or heard from her since.

The following evening, on December 19th, Heather’s car was found parked at Peachtree Landing on the Waccamaw River. The car was abandoned, and Heather’s family and friends were unable to get ahold of her after it was found. As a result, Heather was reported missing.

Early on into the investigation, it was revealed that Heather had been involved in a romantic affair with 38 year-old Sidney Moorer. Heather and Sidney met while she was working as a server at the Tilted Kilt. Sidney’s wife, 42 year-old Tammy Moorer, had apparently found out about the affair and had sent some threatening text messages to Heather weeks before her disappearance.

By December 2013, Heather was trying to move on from the affair. In fact, when Heather spoke to her best friend on the phone during the early hours of December 18th, she expressed that she was upset because Sidney was trying to contact her. After looking at phone records, investigators found that Sidney and Heather contacted/attempt to contact each other numerous times during the early morning hours of December 18th. It is believed that Sidney lured Heather into meeting him at Peachtree Lake that morning.

In February of 2014, both Sidney and Tammy were arrested for kidnapping and murdering Heather. They were also booked on charges of obstruction of justice in the case. However, by March 2016, the murder charges against the two were dropped. They were both still charged with Heather’s kidnapping. The obstruction of justice charges were dropped for Tammy, but remained for Sidney. Sidney finally went to trial for Heather’s kidnapping in June 2016, but the jury was hung and a mistrial was declared.

In August of 2017, Sidney went to trial for the obstruction of justice charges in this case and was found guilty. He was sentenced to 10 years in prison. The prosecution plans to try him again for Heather’s kidnapping in the future.

Tammy went to trial for kidnapping and conspiracy to kidnap during the fall of 2018. On October 23rd, 2018, she was found guilty of all charges. At the trial, it was revealed that Tammy was irate over her husband's affair with Heather, especially after rumors began to circulate that Heather was pregnant in December 2013. In fact, just hours before Heather disappeared, Sidney and Tammy were seen buying a pregnancy test at a local Wal-Mart. Additionally, a family friend named Donald Demarino testified that he saw an image of Heather on Tammy’s phone at a family cookout that was held after Heather’s disappearance. Donald stated that in the image, it did not appear that Heather was able to walk or talk. He was allegedly so distraught by said image that he left the cookout after seeing it.

The image in question was not shown, nor were any additional details given. However, this testimony and all the other evidence provided by the prosecution were enough to convince the jury to reach a guilty verdict in a little under 2 hours.

Tammy was sentenced to 30 years in prison for both charges. The prosecution plans to re-try Sidney for the kidnapping charges as well at some point in the future. Heather’s body was never found and both of the Moorers continue to deny their involvement in her disappearance.
-
UPDATE (9/19/19): Sidney Moorer went to retrial for kidnapping charges earlier this month. This time around, he was found guilty of the kidnapping of Heather Elvis. He was sentenced to 30 years in prison.
-
Lists including this case: